Mission: To publish creative works which are grounded in place and soar with imagination.

Click here for how to purchase I&P Press publications.

The I&P Press was established in 2008 to foster creative writing and scholarship related to Place. Prior to that, when still affiliated with the Lawrence Arts Center, the Committee on Imagination & Place published three titles: Cottonwood 59/60: Kansas Conference on Imagination & Place, Spring, 2002; Imagination & Place: Artists and Writers Portfolio, 2004; and The Wakarusa Wetlands in Word & Image, 2005. This last was undertaken with the encouragement of renowned writer and conservationist Terry Tempest Williams and includes the work of more than forty artists and writers who were interested in the preservation of natural wetlands.
Between 2009 and 2013, the Press published a series of anthologies with specific themes that all ultimately connect to and are inspired by specific places or concepts of place.

See below for how to purchase Imagination & Place Press publications.

For purchases, the Imagination & Place Press has partnered with locally owned The Raven Bookstore, in downtown Lawrence, Kansas. Call toll free 866-294-7198, for phone orders. Or visit http://www.ravenbookstore.com/ ; click on “Orders” and send an e-mail listing the Imagination & Place items to be ordered. I&P is proud to support independent book stores!

Scroll down to view all Imagination & Place Press offerings. 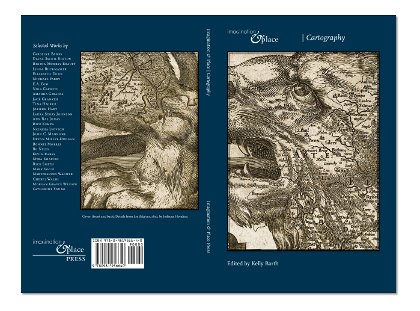 The work in the fifth anthology imagines cartography, both exterior and interior. Edited by Kelly Barth, Imagination & Place: Cartography’s contributors include Elizabeth Dodd, JoeAnn Hart, and Bonnie Morris. Cover: (front and back) Details from Leo Belgicus, 1611, by Jodocus Hondius.

$14.95 plus tax, shipping, and handling.
Click here to view Table of Contents 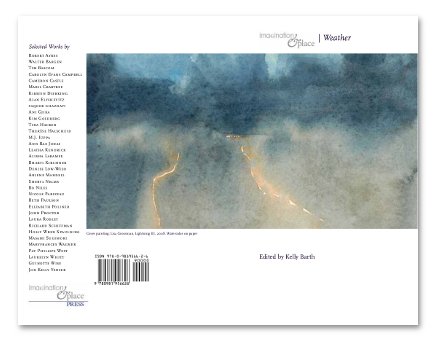 $14.95 plus tax, shipping, and handling.
Click here to view Table of Contents 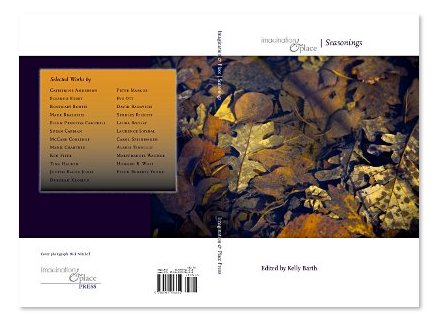 The work in the third anthology imagines the spices of life in relation to space. These seasonings relate not only to food but also evoke cycles in the lives of well-seasoned beings. Edited by Kelly Barth, contributors include Ellen Prentiss Campbell, Laurence Syndal, Maryfrances Wagner, and Howard R. Wolf. Front cover photograph: Rick Mitchell, Clinton Lake, 2009.
$12.95 plus tax, shipping, and handling. 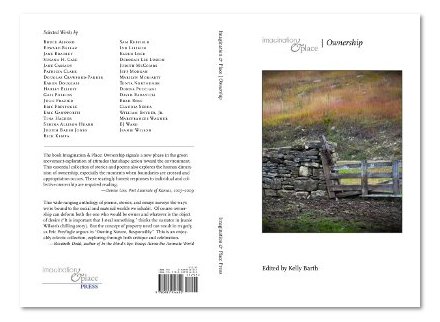 The second anthology in this ongoing series considers the topic of ownership in relation to place. Writers addressed the legal possession of land, its creation of a sense of belonging to and responsibility for a place; the psychologial impact of ownership, as well as the meaning of self-possession and of ownership across cultures. Edited by Kelly Barth, contributors include Lyn Lifshin, Eric Gansworth, Jane Bradley, Marilyn Moriarty, and Eric Freyfogle. 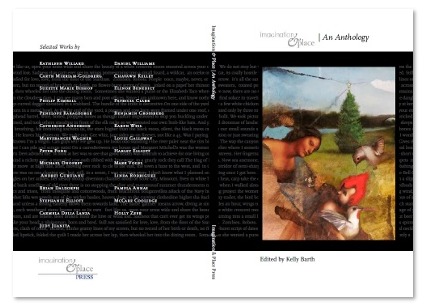 This eclectic anthology offers poems, essays, and fiction that broaden the conversation about place and its relation to the natural world and human culture. Edited by Kelly Barth, it features works by Harley Elliott, Benjamin Grossberg, Caryn Mirriam-Goldberg, Linda Rodriguez, and others.
Front cover painting(detail): Josh Adams, Untitled, 17″ x 17.875″, oil on panel, 2008.
$12.95 plus tax, shipping, and handling.
Click here to view Table of Contents. 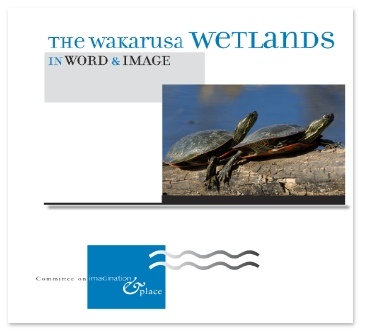 Edited by Denise Low, images edited by Rick Mitchell; with works by 29 national and local writers and 13 visual artists celebrating the area also known as Haskell-Baker Wetlands, located on the edge of Lawrence, Kansas.
Front cover photograph: Kyle Gerstner, Painted Turtles Bask in the Sun, 2002.
$22.00 plus tax, shipping, and handling.

From The Wakarusa Wetlands in Word & Image:

George W. Brown, 1856: “The descent into the Wakarusa is quite precipitous on the east side, and the waters were high. I know considerable time was spent in crossing, and getting out into the timber which skirted its western bank for a considerable distance. Finally we emerged into the prairie, known as the Wakarusa Bottoms.”

Denise Low: “When Williams suggested a volume such as this book, I understood her concept to be a celebration of the Wakarusa (Haskell-Baker) Wetlands. This collection opens with a remembrance of this generous writer’s visit, with excerpts relevant to the Wetlands from her 2003 talks in Lawrence, Kansas. The call for submissions reached both national and Lawrence area writers and artists-many talented people of vision.”

Rick Mitchell: “Images can transform thinking. Familiar places that go scarcely noticed on a day-to-day basis can attain new status through quality of attention-the kind paid by artists to subjects they love. These thirteen artists lend us their sharpened vision, heightened awareness, and perfected craft for the purpose of enhancing and transforming our thinking about the subtle, beautiful, fecund, yet fragile Wakarusa Wetlands.”

“Congratulations! The Wakarusa Wetlands in Word & Image is absolutely beautiful and deeply moving. Please give my love and gratitude to everyone involved. I am so honored to be associated with it. You were far too generous.

The other night I sat down and read the entire book. By the end, I was weeping. It is such a powerful expression of love and concern in the name of community–through Beauty.

You have given the Wetlands a collective story through translations–Eternal presence on the page. Now may they continue to flourish in Peace.

Please thank Denise for including my words.” 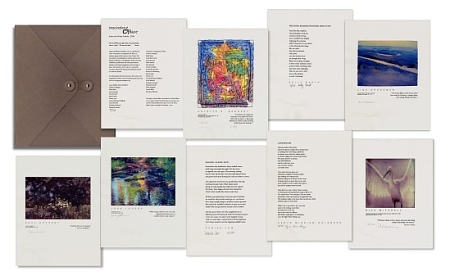 Taking inspiration from the Prairie Printmakers group from the mid-twentieth century and using modern technology, the Committee on Imagination & Place of the Lawrence Arts Center issued a portfolio of affordable prints by recognized artists and writers. Each portfolio contains color prints by artists Colette Bangert, Lisa Grossman, Paul Hotvedt, John Louder and Rick Mitchell, and elegant settings of poems by writers Kelly Barth, Caryn Mirriam-Goldberg, Denise Low, Richard J. Schoeck and Elizabeth Schultz. All prints are hand-numbered and signed by the artist or writer.
Each of the 100 limited-edition portfolios contains 10 prints.
Each 8.5″ x 11″ page in the portfolio has been printed on archival quality paper with a Hewlett-Packard color laser printer and is suitable for framing. 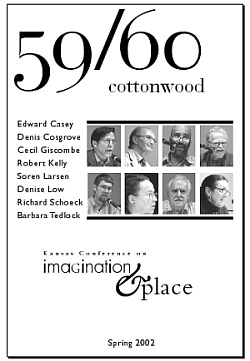